I coppied this article from Pam Holland website...
I need to do this!

The Recovering Perfectionist's Guide to Productivity and Success
by Christine Kane

Perfectionism is brutal.
I meet countless would-be entrepreneurs, artists and world-changers who hold themselves back because they need to "do it perfect." If you're one of these people, then you know the unfortunate truth:
When you wait to be perfect, you never get it done.

It's a painful loop, and it often leads to depression, disease, and a nagging feeling that you're not quite stepping into your life's purpose.

What you'll learn today is that recovery is possible! In fact, most successful people I know have carefully cultivated a philosophy that drives them: Imperfect action. In fact, some will tell you that Imperfect Action is the key to their success. I call these people "Imperfectionists."

An Imperfectionist knows that getting something done is better than waiting to do it perfectly.

An Imperfectionist knows that being a Perfectionist is simply an excuse NOT to take action.

An Imperfectionist congratulates herself for taking small steps.

An Imperfectionist buys herself flowers when she accomplishes something - even if it's not quite up to her ego's high standards.

An Imperfectionist knows that getting a scary thing done IS the reward. Not the kudos or adoration.

You tell yourself you need to get "just a little more information" before you'll try something.

Your mantra to the world is: "I'm just so overwhelmed! There's too much to do! It's so hard to be me!"

You call friends and co-workers to get sympathy for how hard it is to accomplish your goals and dreams. They often agree, citing how special you are because you have been given so much talent - and how it must be quite a burden.

You spend more than one hour per day on Facebook, watching television, or not fully engaging in other addictive activities.

At the end of every year, you wonder why you never seem to move any further towards your dreams.

You are waiting for your POTENTIAL to finally kick in.

How to Become an Imperfectionist
1 - Imperfectly pick one thing you keep telling yourself you want to do.
2 - If you read #1 and think, "I can't possibly pick just one! There's too many!" then do not proceed until you have picked just one.
3 - Get a timer, and set it to 55 minutes.
4 - Walk away from your computer right now and spend 55 minutes doing that very activity.
5 - Repeat #4 again tomorrow.
6 - Repeat #4 again every day after that until the item is complete.
7 - Celebrate the item's completion with chocolate, flowers, or a manicure
8 - Go back to #1 and start over.

An Imperfect List of Things You Can Do Imperfectly
Imperfect Writing

Imperfect Affirmations
Add your own items to this list as needed. Find a way to let yourself experience them without judgment. And listen to this recovering perfectionist when she tells you that your success is guaranteed when you live by this principle!
Christine Kane is the Mentor to Women Who are Changing the World. She helps women uplevel their lives, their businesses and their success. Her weekly LiveCreative eZine goes out to over 20,000 subscribers. If you are ready to take your life and your world to the next level, you can sign up for a F.R.E.E. subscription at http://christinekane.com.
Posted by Suzanne at 10:07 AM 2 comments:

I attended the Utah Quilt Fest in Provo, Utah this week.
I took 3 technique classes.
One of the classes was Sashiko Quilting. 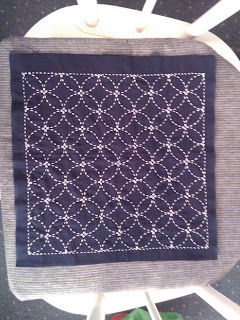 Since I am at home sick with a cold,
I got my block finished.
The design is created by using a running stitch
in white thread on Indigo (blue) fabric.
I enjoyed the class and it was fun to learn,
tho I don't think this is a quilting technique
I will continue to use alot.
I also viewed a exhibit at the BYU
(Brigham Young University) Museum of Art
of African American Quilts made 1945-2005.
The main quilter, Yvonne Wells...
her quilts were absolutely amazing!
At one time she was making 20 quilt tops per week!
Her quilts are created with a religious theme.
The quilt exhibit is at the MOA thru mid November.
If you are in Provo...don't miss it!
Posted by Suzanne at 7:07 PM 1 comment:

I skipped making a report
last week, which I'm not sure why...
This weeks report is a good one!
Fabric in this week: 2 yards
Fabric in YTD: 41 yards
Fabric out this week: 12 yards
Fabric out YTD: 122 yards
Adjusted totals: 81 yards (yeah!)
I completed 3 quilts in the last 2 weeks.
One for me and 2 for my Church's Day of Service
Goals for the week:
Health and Weight:
Eat breakfast each day
Go to the gym at least twice
Stay current on new meds (having a hard time
taking the pills at the right time)
Make and Create:
Pack everything for Utah Quilt Fest (Thu-Sat)
Finish one FESA project
Finish binding on QOV quilt
What are your plans for the week?
Posted by Suzanne at 8:44 AM 1 comment: 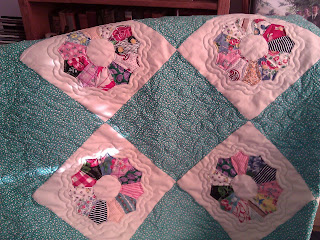 I purchased a box of fabric at the yard sale
about 10 years ago for $10. 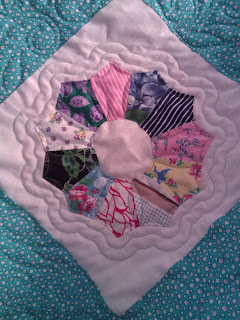 The original owner/quilters had sewn
the Dresden Plates together, plus
appliqued two of them to the muslin blocks.
I finished the applique of the other
14 blocks plus had the top quilted. 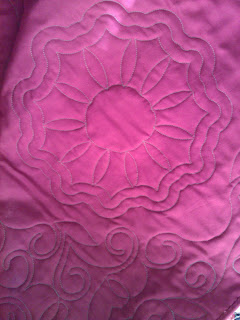 The photo above is of the back
and no, the pink isn't really that dark
(bad phone camera photo)
I think I will be keeping this quilt for myself!
Posted by Suzanne at 9:50 PM 9 comments:

End of the Summer garden produce

My husband is a great gardener!
I buy the plants, but
he plants, waters, weeds and most importantly,
he talks to the plants. 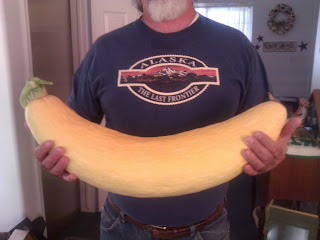 I do not remember purchasing a banana squash plant,
but obviously I did!
Getting out the food dryer
to start drying lots and lots (and lots) of squash.
It will be so good in casseroles and soups
in the Winter time!
Posted by Suzanne at 1:38 PM 1 comment:

Another FESA finish, that I gave away

I decided I wanted to do a
slouchy type of hat for myself
as part of the FESA project.
I picked out the beautiful yarn
I found a beginners crochet pattern at Ravelry.
I made it last night at Crochet/knit group.
Then I tried it on....
yeah, it doesn't work for me at all!
So.... 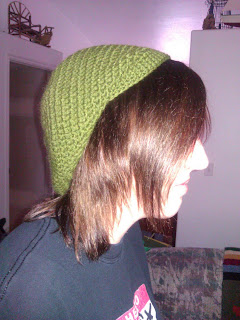 I gave it to my daughter, V.
And speaking of V 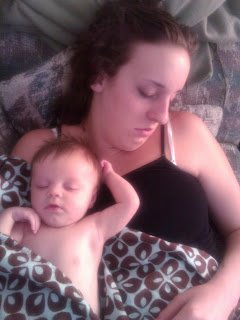 I snapped this photo while V
and her beautiful daughter, M,
were fast asleep.
Love my girls!
Back to the web to find a hat pattern for me!
Posted by Suzanne at 1:20 PM 1 comment:

(try saying that 3 times fast!)
I finished the hat to go with
the matching scarf 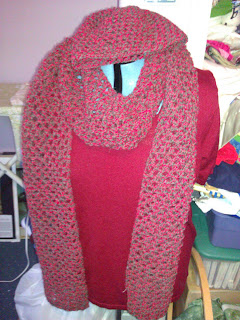 Modeled by my mannequin!
I have my new slip cut out.
Hopefully between tonight
and Friday I can get a top or jacket
finished too.
Need something to wear to the
Rascal Flats concert!
How are you doing?
﻿
Posted by Suzanne at 9:59 PM 2 comments:

I think I have my final project list
written out for my Fall clothing sewing for me.
There are 7 categories,
tho I will not being creating
a piece of clothing in every one.
My sewing plan includes:
Chic Chemises for Cool Climates


Blouses, tops, vests, cardigans, and sweaters! These wardrobe essentials can carry you from day to night, not to mention provide necessary layering to keep out the chill. 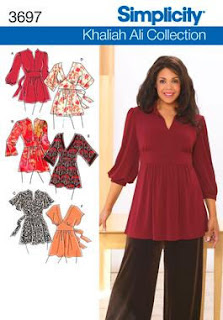 
When you're spending months covered from the neck down, a glamorous underpinning of your choice adds a secret, luxurious touch that chases the cold away!


Is there anything better than snuggling up in a cozy pair of pajamas with a hot drink and a book whilst Jack Frost works his magic outside? I think not! Sleepwear of all types are the way to go here! 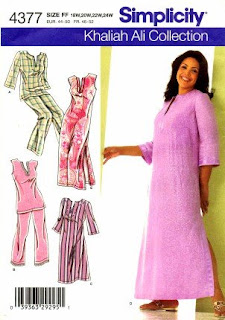 I haven't decided which view I will do. I would like a more traditional nightgown, but haven't found a pattern I like yet.
Baby It's Cold Outside

Coats, hats, and mittens donned to keep the cold at bay, especially when out enjoying the spectacular fall colours!


First, I will be crocheting a hat to go along with this scarf  I just finished.
The yarn is by Fiberart and is a red/gray mix. 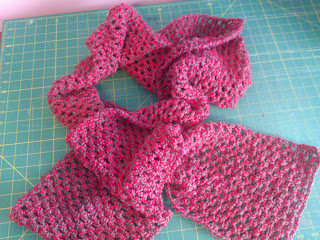 My choice for a casual jacket is: 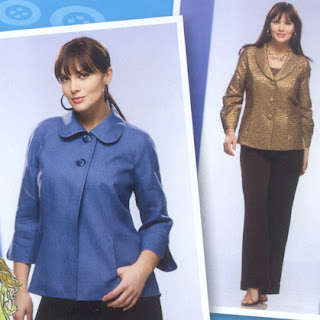 Simplicity 2899...view on the left
My other two jacket patterns are: 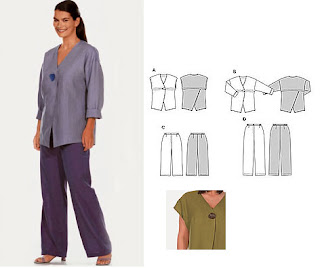 Burda 8627 in the long sleeve version and 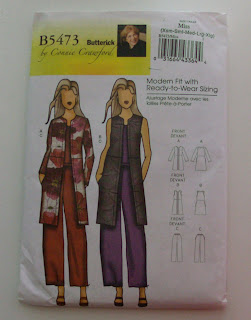 the coat with long sleeve view.
I am searching thru my fabrics now...
This is going to be fun!!!!
﻿
Posted by Suzanne at 1:27 PM 2 comments:

Finally, some progress to report...

Yes! I finally got some sewing done this week.
I have found that if I go into my sewing room,
firmly shut the door,
threaten anyone who knocks and/or calls me,
then....I can find a few minutes to sew.
So, this weeks totals:
Fabric in this week: 0 yards
Fabric in YTD: 39 yards
Fabric out this week: 3 yards
Fabric out YTD: 110 yards
Adjusted total: 71 yards..yay!
Goals for Sept 5-10:
Health and Weight:
Attend gym/pool at least 3 times
Try a new class at the gym
Use new skin treatment everyday
Make and Create:
Finalize list for FESA project
Sew binding on one quilt
Organize Sept 17th quilts
How are you doing on your path of discovery?
Posted by Suzanne at 9:09 AM 1 comment: 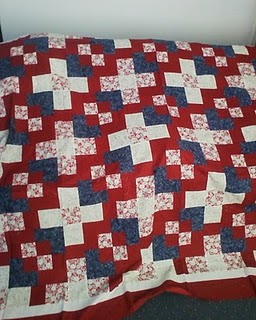 I have had it quilted and I need to finish the binding.
I also finished a couple of dresses for
granddaughter E. She needed a couple more Summery dresses
to get thru until the weather turns cooler.
First up, My favorite Simplicity pattern of all time.
I made this pattern over and over when my kids were little.
I found a new copy that I am now using for the Grand kids.
Second, 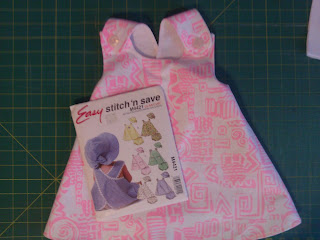 is this easy stitch n' save.
It worked up really easy and fast.
I am thinking about joining the Rhinestones and Telephones
Fall essentials sew along
that will be running for September and October.
My Fall wardrobe is very lacking.
Now to make a sewing list...

Suzanne
I am a Wife, Mother, Grandmother, Daughter, Sister, Aunt, and friend who is trying to do the best I can with what I have been blessed with...and I have been truely blessed!

I love the Gospel

Blogs that inspire me!

Yummy for the Tummy